You, Me and the SPP: Trading Democracy for Corporate Rule discount 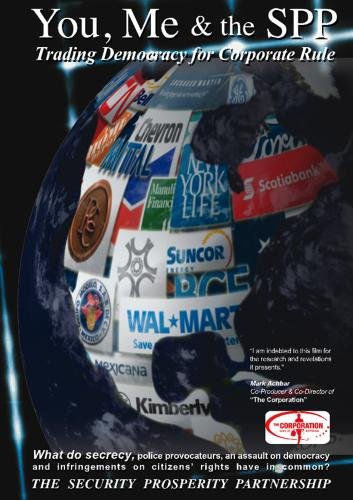 ‘You, Me, and the S.P.P: Trading Democracy for Corporate Rule’ is a feature length documentary which exposes the latest manifestation of a corporatist agenda that is undermining the democratic authority of the citizens of North America. Two processes, the Security Prosperity Partnership (SPP) and the Trade Investment Labour Mobility Agreement (TILMA) are rapidly eroding and eliminating standards, civil liberties, regulatory systems and institutions put in place over generations through the democratic process. Proponents of the SPP and TILMA say that they are needed to keep trade flowing, opponents say these agreements not only undermine the democratic authority of citizens they threaten the sovereignty of the three nations through the integration of military, security structures and regulatory regimes. While the SPP is officially no longer an active initiative for the NAFTA governments a lot of this agenda has already been implemented or continues to move ahead as separate initiatives. “You, Me and the SPP’ illuminates and provides the documentation of this corporate agenda that North American citizens need in order to prepare for the next incarnation of the Security and Prosperity Partnership. Here are a few quotes. “… after the shock of Sept 11 … that crisis was expertly manipulated by our political leaders to push through a range of policies they actually had wanted to push through before Sept 11, but didn’t have the political conditions that made that possible.” Naomi Klein, Canadian award-winning journalist, author “…if we go along with the Americans on their military, on their human rights, on their Patriot Act, on immigration and refugee policy, on energy, on all kinds of regulations over pesticides or whatever, then they will allow us access to their markets.” Gordon Laxer, Director, The Parkland Institute, Alberta “… what the SPP really represents is a parallel government, so that the important decisions are either made outside of parliament and outside of legislatures or they make it impossible for those kinds of decisions to be made in those legislative bodies, so that democracy is slowly being gutted.” Murray Dobbin, Canadian author, journalist For More information Contact: Paul@manlymedia.com www.youmespp.com